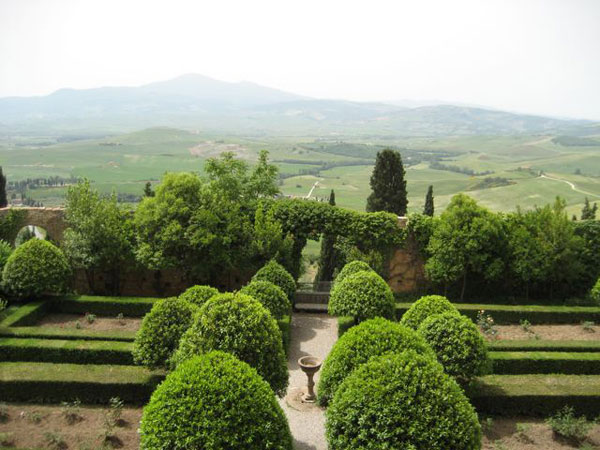 Marjorie returned from Italy… here are the blogs she wrote about the trip, as well as some pictures. Read the original Itinerary here. 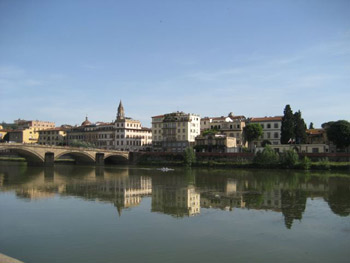 I do not know what made me think I?d be blogging every day during the Gardens of Tuscany Tour.? This was a content-dense experience not because we were so overladen with gardens, but we were in such rich territory every day was an adventure. By the time I hit hotels at night, all I wanted was sleep.

It started the very first day in Florence. Our hotel was a block from the Arno River so an early evening walk was seeing Florence at its most ravishing:? the Ponte Vecchio was in the distance and the light on the buildings reflecting back on to the water was transporting.? That is, until dinner. Our hotel had a really lovely garden restaurant on the roof. So as we were introducing ourselves to each other, the city gently moved into twilight. The air was soft and warm, swallows swooped and dived all around and, as the sunset faded, the lights on the Duomo came up slowly wrapping us in the sheer magic of being in this city.

And our people: what a great lot, I liked them all immediately which is not usual for a normally solitary person. We were twelve plus Linda Thorne who organized it and me.?? A mixed lot in ages and where they came from (Vancouver, Kitchener, Ottawa and Toronto).? We nattered on eating what turned out to be a really good dinner.? Italian lamb is fantastic. 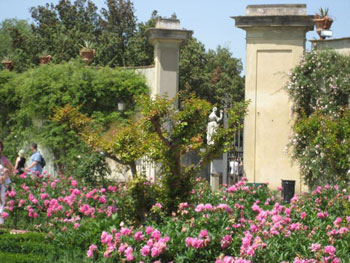 The next day we set off for Villa La Pietra a glorious 15th century Tuscan mansion with framed views of Florence from every level.? We had Nick as our guide and he was just great explaining about how just about everything about was a re-creation of what people thought of as the Italian style of that period. This was actually a 19th century giardino inglese done for Arthur Acton and later restored (in a manner of speaking) by his son Harold Acton who left it to New York University (which means we had a security guard following us around). The most delicious part of an interesting garden was the teatro verde which had put on a production most recently with Dame Judi Dench leaping out from the boxwood wings.? The only off putting thing to me was banks and banks of particularly simpering pink version of lavatera. Gobs of it everywhere.
Next up was the Boboli Gardens. This is a place I?ve visited once before. Didn?t like then, don?t like now. It is one of those hugely pretentious public gardens designed to impress.? And it was 35C on the stone steps that go up forever.? We drooped and spent as much time nipping about from shade to shade.

The leavening part was going back to the hotel for lunch on the roof of the hotel a bit of a kip and then a long walk all over the place on my own.? I stuck to the old city keeping in the shade and it was far away from the tourist-laden areas around the Duomo.

Posted: 8th Jun, 2008
David Young, is a playwright, bon vivant and all around putter- together of people. When he heard I was going on a tour to Tuscany he pronounced: ?You have to meet my friend Giuseppe. He has the best vineyard in Tuscany; he started an opera festival, he writes books on astronomy, he farms on biodynamic principles. He is a Renaissance man.? Who could resist? So between David and Linda we ended up one perfect evening at Castello di Argiano, Giuseppe?s vineyard near Montalcino. 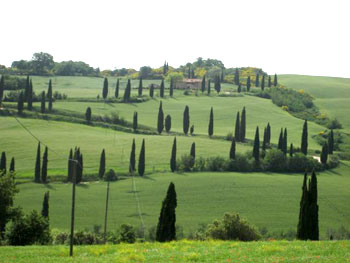 It was one of those experiences that will last for the rest of my life. I can feel tears well up when I think about it. We wound our way through the Tuscan hills on a particularly fine day and when we hit more and more narrow gravel roads and snaked our way forward, all of us were a little wary. The vineyards and olive groves were on steep ancient terraces. Signs saying Privato flanked the steepest road; but then at the top of a hill a big guy in a white shirt with rolled up sleeves and huge black 1970s horn-rimmed glasses was waving us into his little turn around.

Giuseppe Maria Sesti is a tall, handsome man. Sort of what you?d imagine a Tuscan prince would look like and full of welcoming embraces for a friend of David?s. And then began our tour. He bought the abandoned 13th century Castello di Argiano with its tower and grounds in 1975?a quiet place to write and raise his children. And, it turned out, a completely new life farming grape vines and olive trees. 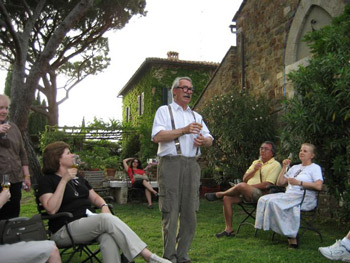 The cave for the vineyard was in the lower part of the tower (waiting on a bureaucracy to allow restoration and renovations). The humongous oak barrels held thousands of bottles of the precious grape were impressive enough. But Giuseppe made the growing of Sangiovese grapes into a passion broaching religious intensity. By the end of his talk we all thought we knew about these special grapes, the mixing of grapes, grape scandals, the meaning of DOCG (Denominazione di origine controllata e garantita) a rare appellation in Italy. Even the oenophiles in the group were stunned by the depth of this fascinating information.

Then Giuseppe?s very attractive daughter Elisa took over in another part of the winery explaining the marketing of wine (way more complicated than could possibly be imagined).One of the old buildings converted to offices and storage in smaller barrels and where she chose the wines for the tasting.

We then walked to the house (no longer crumbling and still complete with chapel) which is perched on the top of the hill overlooking the valley below and the hills beyond. It had to be one of the most glorious evenings of the year. The blue of the valley which you see in paintings is real. The deep valley spread below us is magnificent.? The warmth was not just of the long twilight but what was reflected by this family. Giuseppe?s handsome wife Sarah with her deep velvety voice made us feel embraced by her charming welcome and complete attention and interest.

The whole place looked like the setting for a romantic movie: the long table set out on the lawn with white tablecloth, covered with glasses, bottles of wine and huge platters laden with local specialties?proscuitto, sausages, salami?all made by their neighbouring butcher. I?m not usually interested in this stuff but was tossing it back with great relish because I?d never tasted anything like it. Delicate flavours? and for the vegetarians there were various pecorinos and, best of all, Tuscan bread dripping with the farm?s own olive oil.

The family took turns talking about the development of the vineyard, the making of wine and asking us about us. It felt familiar in a strange way. Of course we should be here with these wonderful people. And it certainly cemented the friendships building within the group itself. EVERYONE was completely blissfully happy. When I looked at each person?s face they were in a zone of contentment you seldom see en masse.

We tried everything: first the Sauvignon, then fruity rosata and on into the reds: blends and then slowly we approached the truly big Brunello. We were over the moon with joy. And there was no discussion about the nose or the aftertaste. It was such a great and wonderful wine that we didn?t have to go into ecstasy describing it with ludicrous images (old tire tracks, grass clippings, remnants of sandbags sort of thing). But that?s not all we tasted. 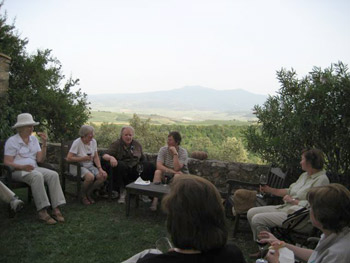 Since the Sestis also grow olives so, of course, we had an olive oil tasting. Weird little glasses with a knob at the bottom confused us at first. But you pour in the olive oil, taste on the front of your mouth and then the back. Drinking olive oil? Well, it tasted wonderful. Peppery and not at all cloying. ?We all have a tablespoon of this every day.? Said Sarah.

I may take it up myself. And then Sarah took us on a tour of her garden which is filled with plants you don?t see much in Tuscany because Sarah is English and she?ll bloody well have a giardano inglese but more like an old fashioned cottage garden than the usual Italian take on this form.

No one wanted to leave. We had to return the bus or you?d find us there still. ?I don?t do this for everybody you know.? Giuseppe confided as we left: ?But for friends of David?.? And the adorable Linda got a gift of a bottle of the magnificent Brunello we tried. And of course she?s going to share it with David and me. I can taste the wine still.