Everyone is out and shopping for plants. I know I’ve been there with you and it was a treat this week to see what places such as Loblaws are still doing. They started on a huge programme of plant production in partnership with nurseries several ?years ago. And they’ve got some great beauties this year. Here’s one of the greats:

This is Hakonochloa macra ‘Aureola’ and it’s been one of my favourites for many years. That it will see a wider audience is thrilling. 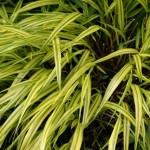 ?It has about 10 minutes of down time and you just flick off the old stuff and off it goes to look like this is a week or so. ?Use it in a container, as an edger or a filler. It is FABULOUS. ?You’ll find it everywhere (I hope).?When I bought my first one (many years ago), a teeny one ?cost $34 and now you should be able to get a good size version for about $10.?

There’s a collection of clematis which should be cut back (gulp) when you plant them. Let them get a head start on their root systems and they’ll reward you later on. ?Have a look at their?wonderful ferns, a new form of Heuchera called ‘Georgia Peach’ which I really like in containers; Weigela ‘Ghost’. ?And they have a new butterfly bush which was developed by Sheridan Nurseries exclusively for them. I’ll talk about it next week.?

Loblaws also has a plant to be a bit wary of: Carex ‘Ice Dance’. ?It’s a sedge I really like, but boy does it spread. ?Make sure you know this before you put it into your garden. It makes a huge clump and does indeed dance all over the place. ?There are other beauties in this species so look for them. ? I’ve hauled all mine out and am donating it to a plant sale on our street.

SATURDAY MAY 16TH: ?the huge GRASSROOTS ALBANY SALE ?will be on at ?211 Albany Avenue. ?You can go to Mark Disero’s terrific new web site: ?Torontogardens.ca and see where all the events and sales are in toronto.?

Meantime my own garden, still soggy, carries on being absolutely glorious. I stumbled on this Trillium grandiflorum this morning. How could I have missed it until now? ?It’s because there are so many other magnificent planets. ? 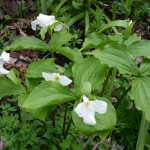