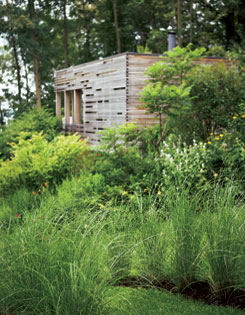 This beautiful piece of Ontario cottage country enjoys exuberant plantings of perennials and grasses that weave seamlessly among three private and unique bunkie.

For a slideshow of photos, see Cabin Fever: The Elements.

With its waving bands of ornamental grasses and resilient native plants, a one-acre property on Lake Simcoe near Barrie, Ont., shows that gardening in Canada?s cottage country is miles away?literally and figuratively?from the traditional English cottage garden. Of course, that hasn?t stopped many cottagers from attempting to replicate that colourful tumble of perennials, annuals, vines and shrubs, even without a thatched roof in sight. Others resort to the all-lawn approach, which means they spend all their time at the cottage cutting grass. This Lake Simcoe garden, which enfolds a main cottage and three small bunkies dotted about the property, has been through both those phases. In its current manifestation, it could be called the ?new cottage garden??one that is true to its site and still reflects the owners? tastes and love of entertaining.

The property was in the lawn phase when it was purchased 28 years ago. A landscape designer installed an English-style perennial garden, but the new owners soon realized they needed a garden that was in bloom when they were at the cottage in summer, not when they were ensconced in the city with both kids in school. So, in 1989, they turned to horticulturist and garden designer Etti Mountain of Botanix in Barrie, Ont.

Mountain?s first move was to get rid of a good deal of the lawn. This was as much an aesthetic decision as an environmental one. There was also a huge bed of shade-loving hydrangeas right out in full sun; not only were they miserable, they also looked woefully out of place. A few of the choice ones were moved into a shady spot, and the rest were taken out. In their stead came the ornamental grasses that now fill three stunning parallel beds carved out of the lawn. The effect is breathtaking; their movement in the wind creates visual drama and enhances the natural feel of the borders around the cottage and its cabins.

Mountain wasn?t wild about ornamental grasses when her client first bubbled over with enthusiasm about them. ??Karl Foerster? feather reed grass looked like wheat to me,? she says, ?and since I grew up in farm country, why would I love that?? But when she saw specimens of golden Japanese forest grass and the many cultivars of maiden grass and sedge, she, too, was smitten with their ?structure and vertical lines.?

The partnership that has developed between designer and owner is one all gardeners long for. These two not only adore each other but they also listen (and argue vehemently). As a result, there is a sense that this garden has a single refined vision?one produced by this symbiotic relationship. They take each other shopping, share enthusiasms and work hard to research any new plants coming into the garden. Over the years, they have made mistakes, too?and corrected them. Experiments with plants not suited to the zone were nixed in favour of native plants and tougher exotics that are flourishing. ?Now we grow smarter,? Mountain says. ?We have to deal with wind-lashing storms, unreliable snow cover and we?re in Zone 4b/5a with only a few micro-climates we can take advantage of.?

One problem they?ve never had to contend with is watering. The owner?s husband is a ?handy guy? (in Mountain?s words) and figured out how to modify a watering system installed years earlier. Water is drawn from the lake to overhead sprinklers that are run on timers when the family isn?t there and manually when they are. New plantings are babied with lots of water, but long-established ones are watered only when necessary and the lawn isn?t watered at all. Supplied with drip systems, containers need only the occasional hand-watering.

Over the years as the family grew older, their life at the cottage became more about entertaining friends on weekends, and the bunkies came into more frequent use. Nestled into separate sections of the garden and surrounded by complementary plantings, each building has its own feel. From a modern wood-slatted cabin, to a log-style bunkie, to a charming wall tent on a platform, all fit unobtrusively into the landscape.

The tent is Mountain?s favourite, and she has massed plantings of black bugbane, goatsbeard and native ferns all around it. ?You can really have fun in a shade garden,? she says. ?There are perennials such as yellow waxbells so large here that people think they?re shrubs.? We search out plants that look amazing when they flower, but we also go for texture when they are out of bloom?the silver leaves of brunnera and the lobed foliage of foamflowers, for example. And we plant en masse.?

Planting en masse in this case is rather modest since Mountain is not fond of huge drifts of one plant. There are just too many good perennials available even for this harsh environment to ignore the many in favour of a few. ?In a conventional massed planting you?d have at least 15 of the same kind of plant and that?s too many for me,? she says. She sticks to about seven and prefers combinations of two or three plants that weave themselves together in a drift?purple coneflowers, Russian sage and black-eyed Susans, for example. There is still plenty of room for summer bulbs and glorious foliage annuals like the black taro by the pond.

It is one of Mountain?s firm principles that once a perennial garden is established, you shouldn?t see even a scrap of bare soil. She likes plants that make big statements: Japanese butterbur with huge leaves 30 inches across; statuesque goatsbeard with its creamy plumes; tall, pink queen of the prairie; sunny yellow ox eyes, and big, fluffy peonies. But she loves to put the small pincushion flowers of a masterwort nearby because ?it looks like a valuable antique? and next to that, the ferny foliage of a dwarf goatsbeard. These catch the eye and draw you closer for a more intimate view.

Clematis-covered obelisks provide additional height while carefully placed rocks give the garden definition. Aviva Rosenfeld and Scott Friars of A.K.A. Grow in Toronto, who designed and built most of the family?s city garden, oversaw the stonework; they used huge slabs of local waterfall rock as stepping stones through the woods. Mountain says, ?We walk through the shady area, find streams of light and put something there that needs a bit more sun.?

Deciduous shrubs and trees also add to the structure (the ?bones? of the garden), but Mountain doesn?t bother with evergreens, a standard structural ingredient in most Canadian gardens. ?I don?t know why you would need evergreens in a cottage garden; the family isn?t there in winter when evergreens have the most impact.?

Cottage gardens Canadian-style don?t have to be clich?d and boring. They are ripe for native plants, wonderful ornamental grasses, and plants such as lupines and coneflowers that naturalize?self-sowing and expanding to form an ever-changing tapestry. Shade-lovers and native plants are readily available now, so it?s easy to find ones that will work in every climatic region. Adaptable and remarkably hassle-free, the new cottage garden knows its own place well.