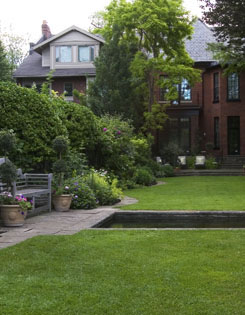 Tucked away behind the scenes in a downtown Toronto neighbourhood is Brenda Dinnick?s classically romantic garden. To pass from the bustle of the city into her backyard is to relax immediately and go with the flow?because every element is sensual yet structured, drawing you in and carrying you along. Curving borders wind toward a reflecting pool complete with a charming bench tucked into the greenery. Beyond, a boxwood parterre is eautifully framed by a clematis-bedecked arbour and decorative treillage that disguises a garage.

A harmonious mix of formal and informal elements, the garden has a settled, cohesive feeling, even though substantial changes have occurred since Dinnick and her husband Wilf bought the house on a grey December day in 1993. From the outset, the landscape architect in Dinnick could see that there was a solid foundation on which to build. The previous owner of the 1889 house was a serious plantswoman named Betty Howe and her legacy included fences clothed in mature climbing hydrangeas and, on the south side, a row of astounding standard euonymus. (The garden is still suffused with the old lady?s spirit?her ashes are buried under one of the trees.) But, for Dinnick, the long, skinny plot lacked definition and a true focal point.

She spent a year just looking at and assessing the garden while renovations on the house were completed. ?It taught me a lesson,? she admits. ?When you go into a client?s residence, they give you their wish list and you go away to try to make it all come true. But what?s really most valuable is to sit in the garden and get the feel of it.?

A reflecting pool cuts across the central lawn.