I seem to have been AWOL for far too long, and I mean to change this and produce a newsletter for each season. In Toronto, we are a couple of weeks behind normal temperatures or what passes for normal anymore. The plants are as confused as any gardener. But we are valiant, we people of the soil, we carry on and do stuff.

Right now, take photos of the garden and figure out where you have holes on ground level. Small bulbs and perennial ground covers should be doing their job to help protect the soil. What’s great about having this carpeting of plants is that they attract beneficials and there will be lots of things for these insects to feed on. Make a bulb list to plant in August and September. The pictures will tell you where to dig them in.

I hear people complaining about the amount of work it takes getting the garden tidied for spring – but what they’re doing seems way out of whack with what’s really needed. Don’t get sucked into a crew with machines coming to blow everything clean. It wrecks the soil.

1. I let any leaves that drop from most shrubs and trees just stay in place. The worms will do the rest of the work. If there is a wet mass of leaves making an impenetrable blanket, lift them off carefully. Or, if the soil around a plant needs warming up, you can gently move mulch and leaves so the surface gets the benefit of the sun. If it’s going to be cold at night though move it back in place.

2. Grasses should be cut back. Take them down to about 5 cm/2 inches to 10cm/4 in. from the ground. If you leave whacking back for too long you might damage the new growth. They also look awful with that dead-hay look which is why overly-grassed gardens seem so dismal at this time of year.
Grasses come in two divisions.

3. Start thinking about slugs. Once you see the little nubs of hostas come out of the ground, pour the following around the outside of the plant area to kill off the larvae forming underground: 1 part ammonia to 10 parts water (this formula changes with every different article you read. This happens to be the one I use, some recommend six to ten). Ammonia is high in nitrogen and it won’t harm plants.

4. Grub control. Beneficial nematodes do work. The temperatures have to be a steady 10C at night and you have to have in mind what you are targeting. Read the instructions. The most annoying yucky things are the grubs that every animal loves to dig for in lawns and borders. These live nematodes infest the larvae forming 5cm under the soil surface, and help bump them off before they can be destructive. I do this in my own garden every three years—I enjoy the process. It’s simple: you swish the nematodes around in warmish water and then pour them around plants all over the garden. 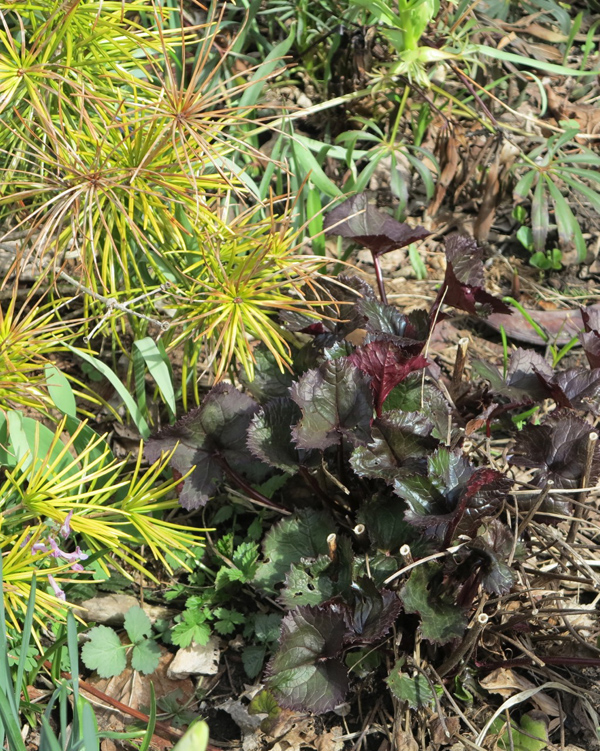 This is the season when you’ll be seeing how last year’s growth is affecting plantings and where they are too close togetther. Here is an example of my own lack of foresight. I plunked the evergreen Japanese Umbrella Pine into place and didn’t take into account just how big that ligularia is going to get. It will shade out the evergreen which is will be moved for its own good.

Sciadopitys spp (Japanese Umbrella Pine) is a plant I’ve very partial to. It’s hardy to Z5, even to Z4 in a really protected spot. I have them in different parts of the garden to see how well they do in a variety of sites. To a plant, they like to be out of the wind and need lots of compost and mulch. They need sun but will accept partial shade. They are slow growing and incredibly showy, so settle them in where it’s possible to see the whorls of elegant needles. 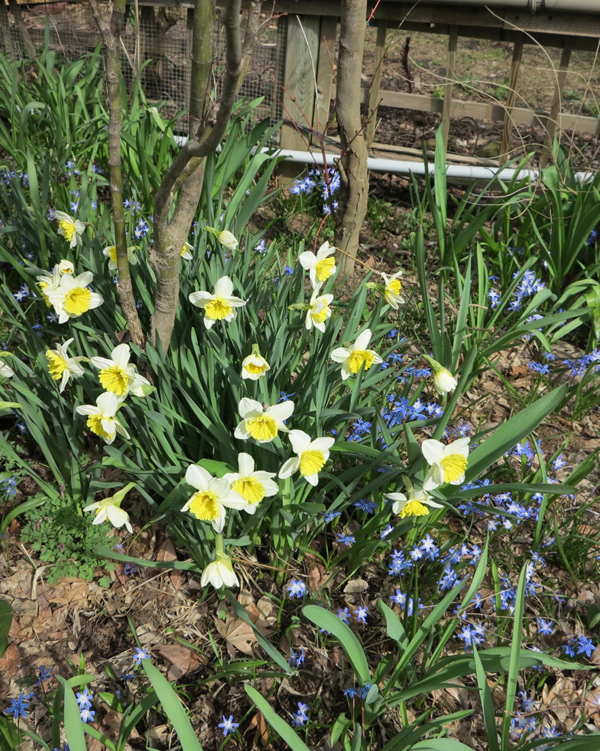 Bulbs around a Japanese maple with narcissus blooming now followed by a big lush hosta to cover up the spent foliage.

Photograph the garden now and you will know immediately where you need bulbs for sensible autumn shopping, and where to plant—for instance around shrubs, evergreens and hostas. When they emerge in spring, this combination is pure ecstasy.

Be careful of Allium ‘Purple Sensation’ which will spread around with incredible abandon. They have spread from my place into my neighbour’s garden and I am so happy that she loves them. Don’t let them go to seed once they’ve bloomed. But check where they are spreading underground. Learn what the foliage looks like and shift them around early in the season.

Earlier this year, the Toronto Botanical Garden held one of the best workshops I’ve ever attended. It was led by one of the world’s greatest gardeners: Fergus Garrett. He is Head Gardener at Great Dixter (www.greatdixter.co.uk) He would add self-sowers to his mix of layers, something I don’t do very often. But he needs them for instant space fillers in a large garden, I don’t.

In his border design, he schedules change in the plantings as follows:

It’s really wise to think about this long view of the garden when renovating an old border and, especially, in developing a new garden. Plant the structural plants first and give them adequate space to grow. Next add small trees and large shrubs which will be in place for a long time. But underplant with little bulbs in autumn. Then consider the parts of the garden where there should be lots of perennials (think seasons of bloom, foliage colour and height) and small shrubs. 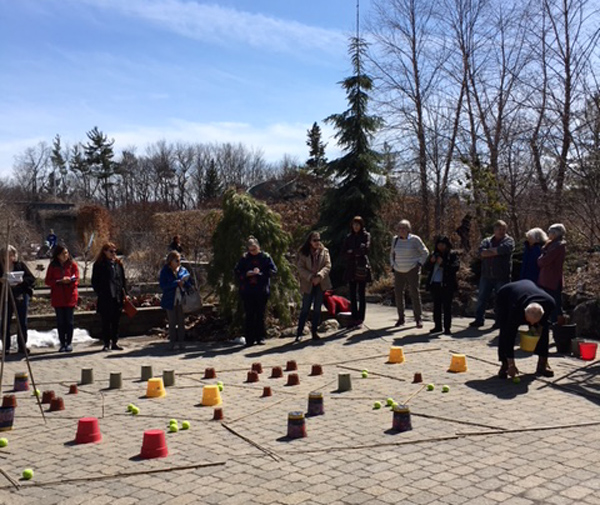 Fergus working with bamboo stales and different sized pots to assess the scale of plants. The theoretical border was 10 ft wide and about 30 feet long (3M by 10M). That’s Fergus doing the not-so-heavy lifting on the right.

This method forces you to look at the volume of each plant and helps with deciding how many plants to buy. A great place for mind changing and a lot easier then doing it when in the throes of a complicated installation.

Remember: don’t plant annuals until the long weekend; don’t rush pruning maples and Japanese maples, let them get a good head start. And make sure silver foliage plants such as lavenders and Perovskias (Russian sage) have started new growth before you start clipping them for shape.

Next issue: I will go through the step by step procedure I follow in every garden whose planting plan I design.

Stop and listen to the garden, it will always have something fresh to reveal.