CANADA BLOOMS AND WILD LIFE IN THE URBAN GARDEN

I don’t know if this is a sign of spring, but I was riveted the other day when a hawk, a HUGE hawk settled in the garden right in the centre on the Japanese maple. I didn’t dare move because I could feel him looking at me so I have no proof of this. We’re used to the red-tail hawk swooping through on his daily hunt but this behaviour was really unusual. When he hopped into the vines on the fence he became completely invisible.  His pale breast covered with dark brown stripes looked exactly like a shrub.

He was either looking at the little squirrel bashing about next door, or had his eye on anything fallen from the feeder which had been filled that day. When he took off it was breathtaking. How can they do that?

It was cheery this week to make my way to Canada Blooms and actually see and smell plants in bloom. They have an amazing track record of forcing plants and it made slogging around on the those cement floors worthwhile. I like the show very much and there’s lots to see without it feeling smooshed together. 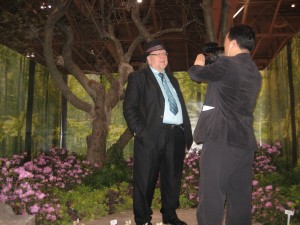 My highlight was talking to Ben Heppner the great Heldentenor. He was standing in his garden named Parisifal (designed by Judith Wright). He was ever so patient being interviewed and I couldn’t resist speaking to him.

Parsifal is the opera that changed my life. Turned me into an opera nut. I also has actually met Mr. Heppner years ago. It was up at the Red Barn on Jackson’s Point when Peter Gzowski used to have fabulous fundraisers for his literacy campaign.  I was doing a small gig on gardening;  and Ben Heppner was the surprise star of the evening. So I like to think I once sang with Ben Heppner (he at the mic me at the back of the stage belting out Oh Canada!).

So we chatted on amiably.  I am his slave forever he is so kind and patient. I didn’t ask if he was a gardener which was fairly stupid.

All  of this  took my mind off the flood that’s begun and will continue until the ground can absorb the snow melt and the water coming in from all around (and rising from Taddle Creek our underground stream). There are snow drops up everywhere. And it really is beginning to feel like spring might make an appearance soon.