When people start whining about how dull the winter garden is, I feel a bit smug. It?s taken 15 years of moving plants around, but my garden looks great in winter. 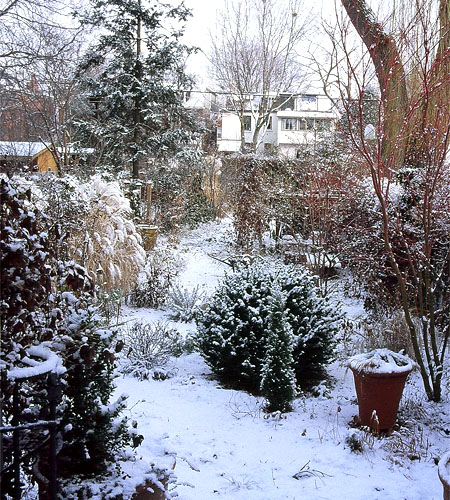 I keep trying different things. Having tiny evergreen plants, for instance, seemed like a good idea many years ago. I combined a charming, 40-centimetre Juniperus squamata ?Blue Star? with the intensely blue ornamental grass Helictotrichon sempervivens. Well, I dismantled this combo last year because I got tired of it. Nothing is written in stone, and changing one?s mind is essential for keeping the process lively and the gardener on the alert for fresh ideas.

I kept the grass and tucked it in beside a subtle variegated sage, Salvia officinalis ?Variegata,? which looks good even this late in the year. There?s Hosta ?Ginko Craig? and some amazing yellow grasses nearby. This is a truly animated corner of the garden and, thank goodness, close to a place to sit in admiration.

Usually, I become annoyed when people enter the garden and start sentences with, ?Why don?t you??? There is one exception, however, and that?s Ann Milovsoroff, landscape architect with the Royal Botanical Garden in Hamilton. She?s got an eye for the poetry of a garden, and when she visits, I get ready to move and add.

One year, she said I had to have a really dark yew to back the coral bark maple, Acer palmatum ?Sengo-Kaku.? She was right. A few years later, the plants complement one another perfectly.

This year, I found a new grass, very blue with gorgeous seed heads of an almost steel-like sheen, and planted it nearby. Good, said Ann, but you need a pencil-thin blue juniper to give more depth to the whole border and draw the eye farther into the garden.

Well, off to market to look for the perfect thin juniper. It turned out to be J. virginiana ?Blue Arrow.? It?s now in place looking particularly regal. I would never have thought of this because junipers are such a clich? and usually used badly. You know: one pointy juniper as a foundation planting at the edge of the border or the house. It just ruins good plants having them overused or improperly placed.

Yews, on the other hand, strike me as being incredibly useful in our climate. This is another group of shrubs poorly served by being used as foundation plants, or sheared into graceless forms. I leave them to find their own shape. They are dense, glossy, highly sensual plants. I have two forms: Taxus x media ?Hicksii,? a bit like the old-fashioned English yew, which has been covered with brilliant red berries for some time now; and T. x m. ?Hillsii.? They each give a strong winter structure to their borders.

New this year is a holly. I?ve always been leery of this plant, that it was not quite right for such an informal garden. Again, I was wrong. I got Ilex x meserveae ?Blue Princess? and planted it in a spot hidden behind towering asters, goldenrod and Buddleia ?Lochinch.? It?s just now starting to show its inherent loveliness. This is also an area with lots of silver, and one serves the other very well, making each appear more intense.

This buddleia has been one of the great performers of the year. It bloomed for months with regular deadheading, attracted all sorts of butterflies, bees and moths and still looks utterly charming, with its grey foliage pretty much intact. I?ve found it extremely hardy, and it shouldn?t be cut back until spring.

Ornamental grasses are everywhere in the garden. The more I see, the more I want. Watching the seed heads move in the wind is one of the pleasures of gazing out the window these days. Some of the heads are bright red, others a rusty silk, even golden or blue. A garden without grasses is poor indeed.

Then there are the small treasures of the winter garden ? the evergreen perennials. The berm is covered with ginger, both Asarum canadensis and A. europeum (a very glossy heart-shaped leaf); Bergenia cordifolia, which turns a slightly burnished copper as winter drags on; and the hellebores. I know they?ll be the first to bloom in spring, but, right now, stiffly textured, deeply notched leaves are taking a place of prominence.

The garden, soon to be stripped of leaves, is a fantastic place this time of year.