Last September while tearing along a suburban street I saw an amazing sight: the lawn in front of a little bungalow filled with trees clad in strange and compelling bell-like blooms. Strange because this was a veritable forest of Brugmansia (formerly Datura) trees, a plant I?d seen only as a shrubby white annual. Compelling because some had huge trumpet-shaped bells hanging down, others pointing saucily upwards ranging in hues from gold to purple. 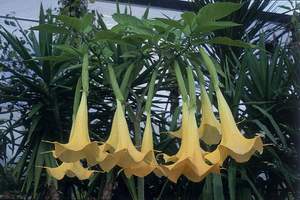 The perpetrator of this astonishing display is Anthony Drew, a hair dresser with Carpel Tunnel Syndrome who needed to reduce his work load. He turned to his garden for solace and went from being plant obsessed to completely fanatical. About five years ago he stumbled on a Brugmansia in a buttery yellow rather than the familiar white. It also cost $29 ? for what he assumed was an annual ? but he was smitten and had to have it. He decided to gather the seed and sell the plants, off-setting the expense.

This seemed simple enough but the plant was B. versicolour. Instead of a compact bush, it turned into a tree and did not go to seed. In the autumn he whacked it right back down and planted all the cuttings. Half of them took and before he knew it he had 60 trees growing under lights in his basement. When they got too big, he cut off more chunks and by spring he had 100 at least 4 to 5 feet tall.

The following March one of his basement plants had 60 blooms on it. He couldn?t bear the idea that no one would see this spectacular sight so he dragged it down to his store. He sold 70 plants to clients and passersby. Some were installed in the garden, the remainder were stored in the driveway. People going by would demand to know where they could get trees like his. Right in the driveway, he?d reply.

In its natural habitat, Southern U.S. to South America, Brugmansia is a genus of five species in the Solanaceae family (same as Deadly nightshade and tomatoes). In some areas the shrubby form is considered a self-seeding weed ? not a problem in Canada so far. In our climate it?s best as a container plant or plunged into a border (as Anthony does in his front garden).

Anthony now grows Brugmansia x ?Double White Lady?; B. sauveolens, a single 3M white; B. x candida ?Double Golden Queen? and x c.?Black Current Swirl? from Thompson & Morgan seeds. Plus his original B. versicolour and a B. sanguinea which has a magnificent orange bloom.

Since seeds of the hybrids don?t come true, Anthony depends on cuttings. It requires patience since they take two years to bloom. He recommends planting in the largest container possible ? 18 to 24 inches wide ? where it will spend the rest of its life. Plant in a rich soil-based potting mix, and place in full light. From spring to autumn water heavily and add a balanced 20-20-20 or fish emulsion fertilizer both at half strength every time you water. Unlike any other houseplants it?s impossible to over water. In fact, if it dries out, all the bloom buds will fall off. A good dose of water, along with a hit of fertilizer, will restore the plant. By spring it may have up to 40 blooms.

Brugmansia can also be treated like geraniums. Cut back to the Y at the top of the stem, put in cold storage and barely water until February or March, then slowly bring into moderate light. If you have a conservatory or bay window facing south (as he does) they can be kept alive all winter with almost no help.

If people are disappointed in their plants, it?s because they don?t shape or trim them for form. Anthony grows his up a 4-foot bamboo pole and attaches them to the bamboo. He removes all the side growth until it reaches the height he wants before letting it branch out. Once it?s established it will continue to grow from that spot.

All of the trees have a really strong scent which releases early in the evening. He suggests removing some of the blooms if it becomes overwhelming. The smell is to attract those early evening moths. During the summer, he can see hundreds of gigantic moths fluttering around the blossoms sipping from the throat of each plant.

Brugmansia will succumb to spider mites, whiteflies and mealybugs in the house. If there?s an infestation, he suggests cutting them back severely leaving almost no leaves at the top of the tree and then wash it off with a mild soap and water spray. Get rid of the leaves in the garbage. Be warned, absolutely every part of this plant is poisonous. Anthony?s cat chewed up some leaves and was very sick for three days.