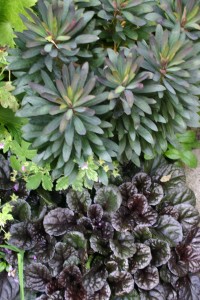 ?Here are Euphorbia ‘Black Bird’ with Ajuga ‘Black Scallop’ a favourite combo from my own garden.

Black is my favourite colour. My wardrobe is such a sea of black it periodically drives me crazy by being so predictable. When it comes to black in the garden, however, we?re talking a whole other matter. Black is eccentric. Black is dramatic and it certainly isn?t predictable.I had never seen a black plant before spotting a black iris at UBC?s magnificent Asian Gardens many years ago. It was such a knockout, so riveting that I became enamored of black plants generally. There is something perverse about them, partly because they are rare and unusual. The search began for anything black and though there are few pure black blooms, there is black foliage.

I turned to Larry Davidson who is not only a wonderful plants person (his nursery Lost Horizons is one of the best in the country), he is also a noted garden designer. He establishes his colour masses not from blooms but from foliage-a man after my own heart. He regularly uses black in his designs and he believes we are attracted to black plants because we love their mystery. ?There is no screaming colour here just a peaceful serene moment in a border. The colour of black is so subtle that no matter what you put it near, it will be brightened up. Yes, black adds subtle nuances.? This captures exactly what he needs in his intimate gardens where tranquility has become a trademark.

Perhaps to explain black foliage?s tremendous usefulness is the many different kinds of undertones it contains-purples, red, bronze. Each will pop those very same colours in other plants and make them almost shine. Because black plants are relatively rare, Davidson hasn?t used them in a mass planting but is convinced that if he got enough together it would make as good a show as putting gold plants together.

He uses black as a focal point or as a statement in the midst of other things. And though there aren?t too many pure black plants, some of the best reaching for blackness are terrific plants such as Cimicifuga ?Hillside Black Beauty? and ?Black Negligee?. And, he points out, you can get the same effect with ?Brunette? if it?s in enough sun. And there is a new cultivar called ?James Compton? for which I have great hope. The colour is holding true so far this year. Davidson put a C. ?Hillside Black Beauty? next to an aging gold juniper in his demonstration garden and both seem to be almost luminous by their proximity.

To make the point about black?s undertones, he uses the example of putting Iris chrysographes ?Black Knight? with its blue undertones in a border and, he says, ??it kind of sings in its subdued way.? He also uses as many of the dark asters as he can certainly both ?Prince? and ‘Lady in Black? to great effect in the autumn garden.

Heucherella ?Burnished Bronze? is a new plant to me and though it isn?t quite black, it is a nice contrast in the shade with hostas. And it will stay that colour when many other almost black plants revert to green in shade. For instance one of the hottest new plants this year is Sambucus ?Black Beauty?. It was a beautiful ebony shade when I got it, but the new growth in places where there?s any shadow at all is coming in green. The sunnier the spot, the blacker the foliage it seems.

Heuchera ?Black Beauty? also needs more sun than the usual hybrids of these coral bells. It has large ruffled leaves and with the sun shining through you can see that its undertone is deepest plum. Maybe it will blacken up with time. This plant is so attractive I frankly don?t care what colour it is and, if it remains intact all winter the way ?Velvet Night? does, I?d be very very happy.

Black mondo grass, Ophiopogon planescans ?Black Knight?, is the rare exception of being a true black. Anyone who?s afraid of invasive grasses should try this one: it grows so slowly it barely creeps. It?s gorgeous and I?d love to have it spread near a Japanese barberry, Berberis thunbergii ?Atropurpurea nana?. I wanted the deep burgundy shade of the barberry to be floating on a sensuous black base. No quite so far. In a container with the brilliant yellow of creeping Jenny, Lysimachia nummularia ?Aurea?, this black grass is a stunner. Mondo grass has been around for years, though not as widely distributed as I?d like to see (as in I forgot to buy it earlier this year and the nurseries are now cleaned out).

I have one black annual that?s going to be a regular here: a black pincushion flower, Scabiosa atropurpurea ?Ace of Spades? and it?s a beauty. The stems grow to 60cm high and the pitch black centre is surrounded by rays that look like velvet. It?s a complete contrast with the Dicentra ?Goldheart? I have it near. Wonderful.

Don?t put a black plant in the garden casually. Under a shrub it will look like a shadow though that may be exactly what you want. In certain lights it will just fade away into, well, blackness leaving a hole, albeit black. I think placing black with lime green plants can make both look more intense, with a pure white a brilliant contrast, with silver, gray and gold it is nonpareil. Black plants should stand out, they should be magnificent contrasts, and soft harmonies. All of which makes them slightly more versatile than my wardrobe.