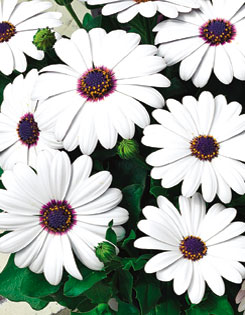 Deck your garden with silver and white to make your suirees shine.

Lavender twilights and sultry summer evenings invite spending time outdoors. The garden can be intriguing and gorgeous by moonlight (or candlelight) even though your eyes can’t perceive the vivid colours of daytime. Instead, make the garden come alive with shimmering white blooms, silvery leaves and beguiling scents. Tuck these vespertine divas near doorways, paths and sitting areaswhere they will truly be stars.

Artemisia (Artemisia spp.) Silver-leafed plants are covered with tiny light-reflecting hairs that give them a ghostly gleam. Among the best are artemisias, including ‘Valerie Finnis’, ‘Silver Queen’, and ‘Powis Castle’. Tough, drought-tolerant plants two or three feet tall, they are vigorous but can be reigned in. Sun. ZONE 4.

Osteospernum ‘Asti White’ (Osteospernum) (pictured) An All-American Selections winner for 2008, this new annual osteospernum in brightest white not only flowers earlier than its predecessors but can also be grown from seed. A standout by day or night, its blooms are carried on 20-inch stems, ideal for cutting. SUN.

Datura or thorn apple (Datura meteloides) First off, all parts of this exotic-looking annual are poisonous, but its huge upward-facing white trumpets with a scent to swoon over are irresistible. They’re followed by spiky seedpods resembling miniature maces on bushy, three-foot tall plants. SUN.

TIP: Pots planted with snowy white flowers can also be set around the garden to add instant allure.