The Garden in Winter 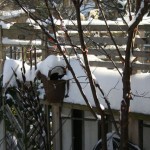 I was at a really fabulous party last night, able to finally get out of the house after the endless cold subsided. The divine baked beans, great people and laughter. What a contrast with the past two weeks of ?lollygagging between bed and sheer exhaustion.?I found it odd though, that people who don’t garden say things such as “You must miss the garden now that it’s dead.” I must have replied ?half a dozen times: “It’s not dead, it’s dormant.”

It’s another one of those disconnects we have with nature: if we can’t see it, can’t use it, ?it’s dead to us. I think ?of the garden in winter as having a massive amount of life but just a little further into the soil. ?The compost is probably smoking in its core, and there are a ton of evergreen plants covered up for the the moment. ?And those worms are still doing their job way down deep under the ice.?

Here’s a sight that made breakfast enchanting: steam was rising off the snow in the intense sunlight. The backlighting shows the exfoliating bark of the paperbark maple ?as delicate as crystal; ?the barberries are still covered with berries; and the evergreens looking superb against the depth of snow we are now sporting. ?I want more and am figuring out where I’ll put them.