It’s dreadful what we do to city trees. Yet another old one was chopped down on our street last week. There might have been a reason (a Norway maple of great age, hollow in the middle) but it also might have been saved for a few more years.  And all the other trees I see in our neighbourhood are looking dry and dusty.  Why people  don’t get out there and water them is beyond me.

Until this most recent tree felling, I didn’t know the following:  a mature tree can add $30,000 to the value of your real estate. The nabes were bemoaning the fact that the loss of the tree not only devalues their home, they are now in the punishing glare of the sun. “It was like living in a tree house on the second floor.” one of them said.  And the exposure in this heat wave is almost unbearable. A baby tree, this time a silver maple which isn’t the best of city trees, has been planted nearby and will probably vault. But what a loss.  It will also mean that two more houses will be getting air conditioners.

but look at this: 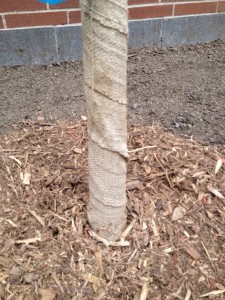 This is a large chain’s idea of replacing the canopy: 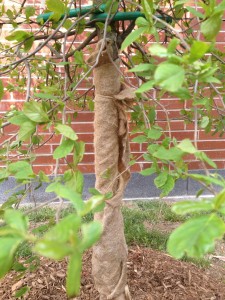 Instead of hiring someone who knows how to plant a tree, this company allowed plant-blind construction workers to toss them in the ground like this. If it was unusual I wouldn’t be weeping but we’ve seen more travesties perpetrated on trees this summer than ever before.

People want big trees to get an instant effect and what they are getting is a specimen being toted in on a machine, shoved into the ground and left to fend for itself. I think these companies should be fined.  I think people who do not look after their city trees should be fined.

If these trees add so much value to our real estate why don’t we respect them?

Sorry but this has put me in such a bad mood. Reader Monique Dobson sent these on to me and I’ve been heart sick ever since I saw them.  You probably have the same sort of thing going on in your ‘hood. Complain to the management, make a stand for our city trees. We need them to breathe and lower the temperature of the vast heat sink we’re living in.