It’s amazing, no, it’s incredible to see spring bursting out of the soil so early. This is what I now think of as the Vancouver section of the garden: 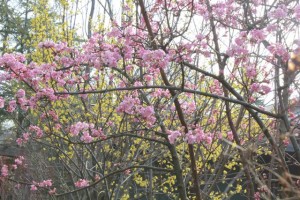 This is Viburnum bodnantense with a  Cornus mas behind it,  blooming far too early and on this rare occasion together. It reminds me of Vancouver during its early spring blooms. You can pass street after street filled with pink and yellow blooms to the point where you never want to see them together again. This was quite unintentional on my part but nature has dished out a strange spring.

The viburnum doesn’t usually come out until the second week of  April. The dogwood is also a little early. And it’s usually finished by the time the viburnum comes out. This partnership is quite something.

Stuff’s coming up too early and it’s going to get blasted by a cruel dip in temperatures that will inevitably come in the next few weeks.

The Magnolia stellata which came out overnight and is now blooming attracted squirrels like mad and it’s going to be over before April. 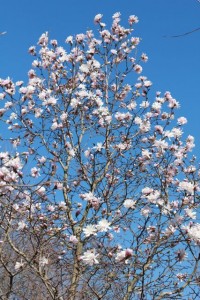 Bulbs are popping everywhere:  species tulips, chionodoxa, of course masses of scilla, and the buds are plump on almost all of the trees and shrubs.  There’s not a damn thing we can do about it.

The front garden  (below) in harsh light

which is not really fair but this shows

just how many bulbs are not just rising but they

are blooming their faces off and probably out.

I will have a piece in the Globe and Mail’s LIFE section this week about what’s going on. Please look for it.