I asked for some contributions to what makes a good garden combination. Here’s a really imaginative one from Barry Parker. He has a glorious garden in downtown Toronto. It’s the kind you like to return to a couple of times a year to see how his imagination pushes it onward. 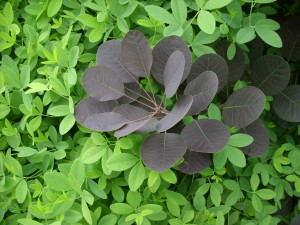 Barry says:  “My favourite plant combo is Cotinus ‘Royal Purple’ and Baptisia ‘Purple Smoke’. First thing in the morning when there is still dew on the leaves they are spectacular!”

Couldn’t agree with him more. The foliage on these two plants are both so well-defined they make a gorgeous contrast. It works really well.

Cotinus, smoke bush, now has many sizes in varying cultivars but ‘Royal Purple’ is still one of the strongest and best available.  In cold areas it will die back in winter. But here in Z6 we can expect it to winter through most years. It doesn’t cause much trouble and the leaves are such a rich texture.

Baptisias in any form is not the easiest plant to grow. They take forever to have their lovely blooms, followed by dramatic beans.  It’s easy to get discouraged about it but it’s drought tolerant with smokey blue foliage and then amazing purple-blue spikes of bloom are staggering.  This is a combo I’m doing to be keen to try if I can shoehorn a cotinus into the space near the baptisia.

Thanks so much Barry.   If anyone else has a great combo I’d love to see it.

Harvey Wrightman is another absolutely first class plantsman and though you have to get his catalogue   www.wrightmanalpines.com as an excellent reference to rare and unusual plants, you have to go to his site and look at the videos. Most garden videos are unbelievably boring, not Harvey’s. The one with the little kid making a rock garden is funny, charming and one I go back to regularly just to be cheered up.

Hallelujah Lost Horizons catalogue is with us as well.  It is one of the most complete and interesting catalogues in the country. Larry Davidson is very careful with his plants and he’s also a grower in a tough area  (windy not a lot of snow cover) so it’s plants are tough and very well grown. I can tell I’m in trouble already, stickies abound. He doesn’t ship any more but you wouldn’t want to miss the nursery anyway.   www.losthorizons.ca It takes about 4 minutes to print out the catalogue. Worth the money and the paper.

Fraser’s Thimble Farm has nary a picture and it is definitely a must-have. Tons of unusual plants and they will ship the little stuff. www.thimblefarms.com.

More to come. It’s the only way to ward off February blues.