The garden as usual the great solace is blanketed with yet another  dump of lovely fresh snow.  Best mulch of course, but a little hard for slogging about back there with compost. Gotten very lazy about doing that so it’s into the city compost.

This dogwood is on my mind. It looks great in  my neighbour Laurie’s garden which is where I shot this picture.  I took out its mirror image on my side of the fence.   I found that it suckered way too much for me. And though we diligently dug it out, it’s still suckering its way around. 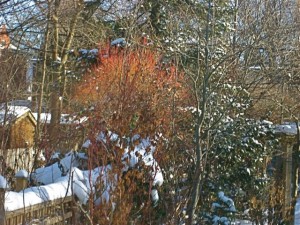 I was disappointed in this though I want Laurie to keep hers so I can enjoy it from the house.  There are better cultivars such as ‘Winter Flame’  at least so they seem. I’m looking at catalogues which say that ‘Arctic  Fire’ doesn’t sucker.  That’s either dead wrong or my plant was mis-identified.   I believe it suckers.

But looking at this makes me want to have many coloured stems. So far here there’s a struggling Acer palmatum ‘Sangu-Kaku’ which has fantastic colour but it may not last to many more years.

Cornus alba ‘Sibirica’ which I planted back in 1968 has grown, fallen apart, been pruned back into youth and is now looking tiny but intense. By next year it will fill a good space and be more obvious.

Love this species. And the sizes are just right for a small garden planted individually, and en masse in huge or country gardens.

Thank you thank you for the kind comments about my husband Jack’s condition. We’re in the depressing waiting for medical attention mode.