Perennials are blooming all over the garden, the foliage of  the  trees and shrubs here is magnificent. And what a relief after a month of web problems,  and writing nonstop every day.  I have now recaptured my life AND my garden. Everyone who’s come into the garden has had a hand at whacking away at it to make  it much more articulate.  It’s amazing:  it’s like bangs. You can see through your hair but not perfectly. What started this was a visit from Larry Davidson of Lost Horizons nursery who brought in  new and astounding plants, a load of great mulch and here’s what happened:

That viburnum needs some taken  out of it, says Larry.  This is my baby and no one’s going to touch it.  I might have yelled: “No, NO. You cannot touch the  ‘Summer Snowflake.”  But, Larry point out, “it’s cramping the garden which is not nearly  see-through enough.”  So I  ran back into the house, and decided it did have the look of a particularly bad haircut.  Out came the branch, can’t remember what it looked like before. But this is what it looks like now.   And another huge shrub is gone:  the Physocarpus ‘Diabolo’. It got was too big and unruly. And now I can actually see the silvery willow which is finally having its day in the sun which it definitely needs. 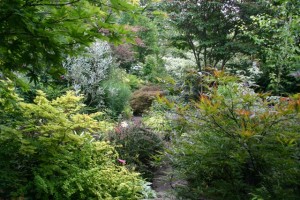 The phlox and lilies are in their glory now

Right now the Phlox ‘David’ is in full bloom and it’s glorious.  It’s a very old-fashioned form and still my favourite. It’s also a form that doesn’t get all yucky with mildew.  The Monarda ‘Raspberry Wine’ is in fettle as well. And the boring lilac standard is smothered in Clematis ‘Betty Corning’.

I have had fantastic luck with the  lilies, they are making the whole house smell wonderful. The dreaded lily beetle hasn’t attacked yet. Most of my friends have simply given up. But one or two people I’ve talked say that NEEM if used properly does help.  That and daily squishing.

Tomorrow a.m.  that’s Sunday August 9th I’ll be on CBC’s Fresh Air with Mary Ito between 8:30 and 9 talking about all the awful diseases that are hitting us this year.

I’ll be speaking in Stratford next Sunday August 16, under the aegis of ANYTHING GROWS.  Check out their web site.  It’s at 3 p.m. at the Old City Hall.

I’m so glad to be back doing this. It’s been technohell. But I’m hoping things are going to go more smoothly.  You can get in touch and I’ll send you the summer e-letter.